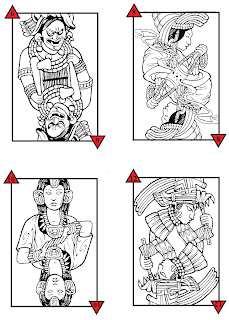 For my sources, I appropriated imagery from the archives of each broad racial group depicted. I suppose some today would object to this on several levels, but it boots not. Oh-so-cleverly the numbers of sides on each symbol increase…the circle having one (or two if you count both inside and outside), the crescent having two (or four…), &c, &c. Naturally, being playing cards, the images need to be mirrored and it was fun working that out. A little more difficult, and certainly less successful, was the lettering (not depicted in these images) for each “court card”. The object was calligraphy which read the same whether upside or downside for the words: LORD, QUEEN, PRIESTESS, WARRIOR, ASSASSIN, THIEF.