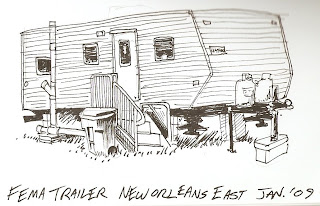 I’ve recently returned from my 4th annual Katrina Relief expedition to the great city of New Orleans, for whose contributions to American and World culture we are deeply indebted. My thanks to United Methodist Committee on Relief (UMCOR) for their logistical work at Ground Zero. This year we again worked in New Orleans East, a middle-class, mostly African-American enclave which was inundated by Lake Ponchatrain in 2005.

Ours was a small group of six this year. Also staying at our base were 2 dozen scholars from Albion College in Michigan. Those kids spent 2 weeks of holiday break working their asses off. We took only 1 week, but kept busy building a scaffold in order to spray texture finish on the walls and ceiling of a stairwell, something we had not done before. But, our biggest task was setting ceramic tile on the first floor of “our” house. I’ve done a fair amount of this and Jean-Claude had done a little, however the ladies of our group had never, but it worked out great and everyone learned some things. We got most of it grouted and cleaned too. If we only had had a couple of more days, we could have finished the living room, too, which was full of cabinets and doors and much more. And hung the doors as well! But somebody else will get to it and with perseverence the owner, Pamela, will finally move out of the FEMA trailer (pictured above by little ol’ me) and back into her home after 4 years.

We ate very well indeed, as one would expect in NOLA…plus this is the start of King Cake season and we sampled several…our favorite is Randazzo’s…we found a pile of ’em in Chalmette. Which reminds me…Brad Pitt’s house building initiative in the Lower 9th Ward is underway….where last year we saw pink tents, we now saw visually striking unusual homes going up! And the little shotgun where most of our crew worked last year by UNO is painted purple and orange and lived in again.

I met my old friend Steve at Ernst’s where he used to party back in his college days and who should show up but a colony of NO Hornet cheerleaders, the Honeybees…from there we headed to Maspero’s for some cheap eats and onto the Napoleon House for sazaracs. My buddy Dave urged that I try the sazarac, perhaps the most ancient cocktail known to man, the ur-cocktail one might style it. I had made one at home, using the Savoy book as my guide, but that was but the scribbling of a child with crayon, compared to the sublime offering of the Napoleon House. Dave had recommended the Hotel Monteleone and our taste-testing team did sample their wares, but the Napoleon House won out hands down. Next year we hope to try a sazarac from the alleged creators of the Louisiana State Cocktail, the Fairmont Hotel, due to re-open in the spring of ’09. Until then, bon appetit!

Welcome to my Blog

Welcome to my Blog