The Billy the Kid Pageant 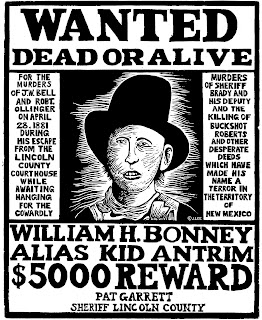 Every August, Lincoln hosts a Billy the Kid pageant, the highlights of which are the parade and performances of “The Last Escape of Billy the Kid”. The play is corny and amateurish, but rings with integrity. It is actually performed by local folks in an outdoor setting mere yards from the very courthouse where the eponymous event occurred. The play has hilarious dialogue, horses and lots of gunplay. Matt, his wife Becky and probably half the populace of Lincoln have all appeared in it. For a period of years, I and my friends would turn up for Pageant and sell Billy the Kid t-shirts. Pictured is one of the designs. It is originally a linoleum print.